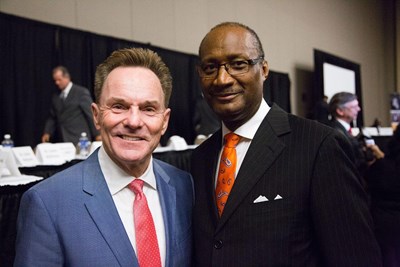 The two leaders of the largest Baptist groups in the U.S. announced their decision at the end of the panel discussion hosted by Mission Mississippi Nov. 4 from 8:30–11:00 a.m. at the Jackson Convention Center.

Floyd presented the idea to Young as the panel discussion was segueing into a question and answer segment with the audience, recommending that both men appoint perhaps three members from each Baptist group to continue dialogue on a conference call and determine three or four steps to implement to achieve racial reconciliation.

“Not to minimize anything, but we want to be able to have dreams that we can conquer, and we have to crawl before we walk, and we have to remember we’re nothing more than a bunch of preachers trying to proclaim the Gospel to a world that’s desperately hurting,” Floyd said to Young. “Would you be cool with that?”

“I would be cool with that,” Young responded. “I think it’s absolutely on time. I wrote down why don’t we establish a steering committee for that very same reason. … I think progress is not about speed; it’s about direction…”  Read More