President Young Participates in Stronger Together in Jackson, MS 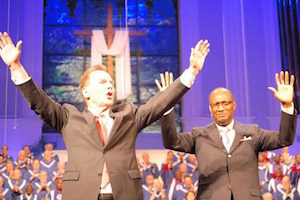 Baptists in Mississippi stepped to the fore in worship and dialogue across racial lines this summer.

First Baptist Church in Jackson hosted “Stronger Together – A Night of Unity” Aug. 25 to honor the witness of Mother Emanuel AME Church in Charleston, S.C., where a gunman killed the pastor and eight others at an evening Bible study in mid-June.

In July, the first “Can We Talk?” Mississippi Black Church Leadership Conference was sponsored by the Mississippi Baptist Convention Board at the Jackson-area Morrison Heights Baptist Church in Clinton.

The Stronger Together event in Jackson, which packed First Baptist’s auditorium, included an emphasis on Christian unity in Mississippi and America at a time of volatile racial tensions in many communities…Read More